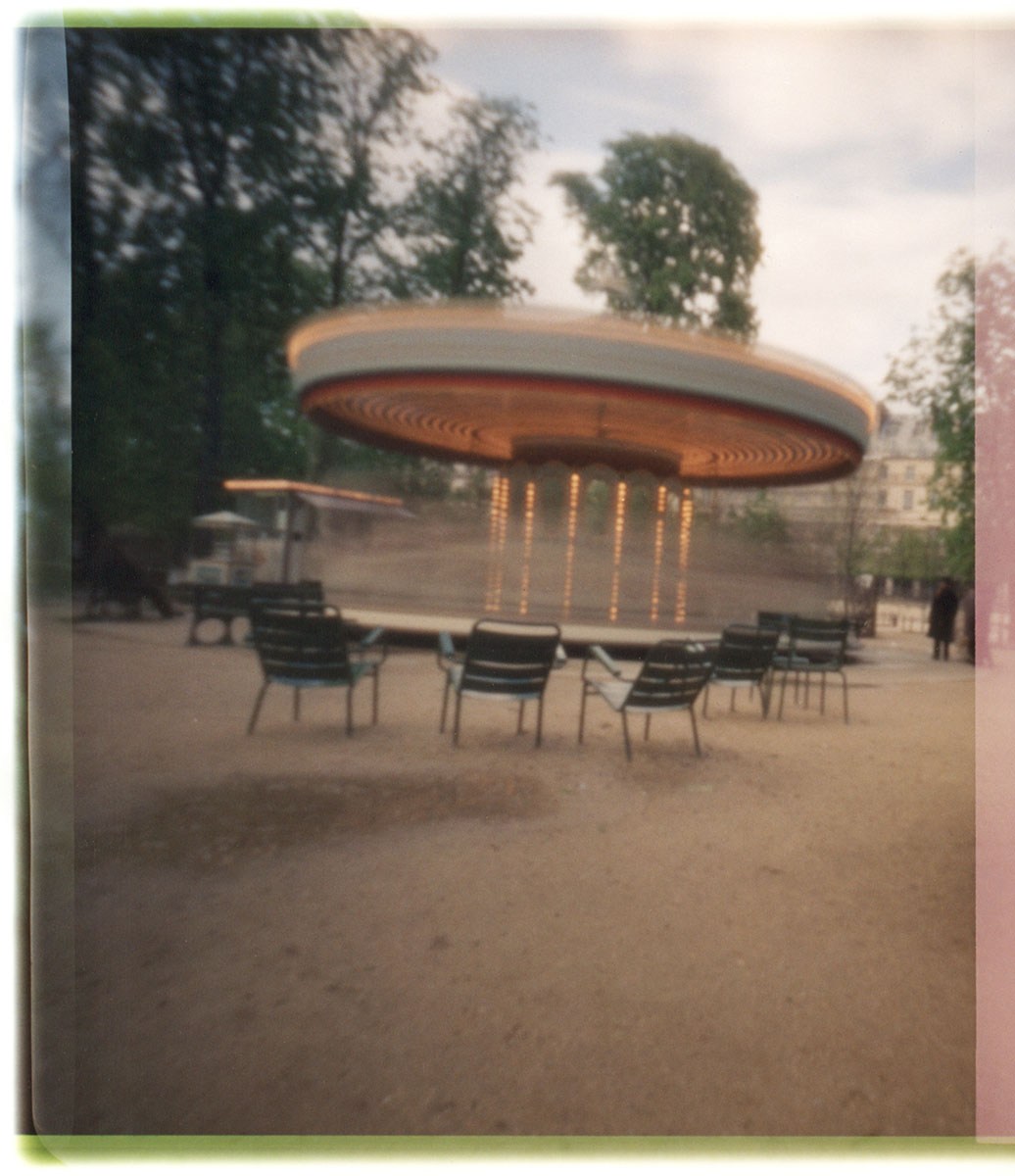 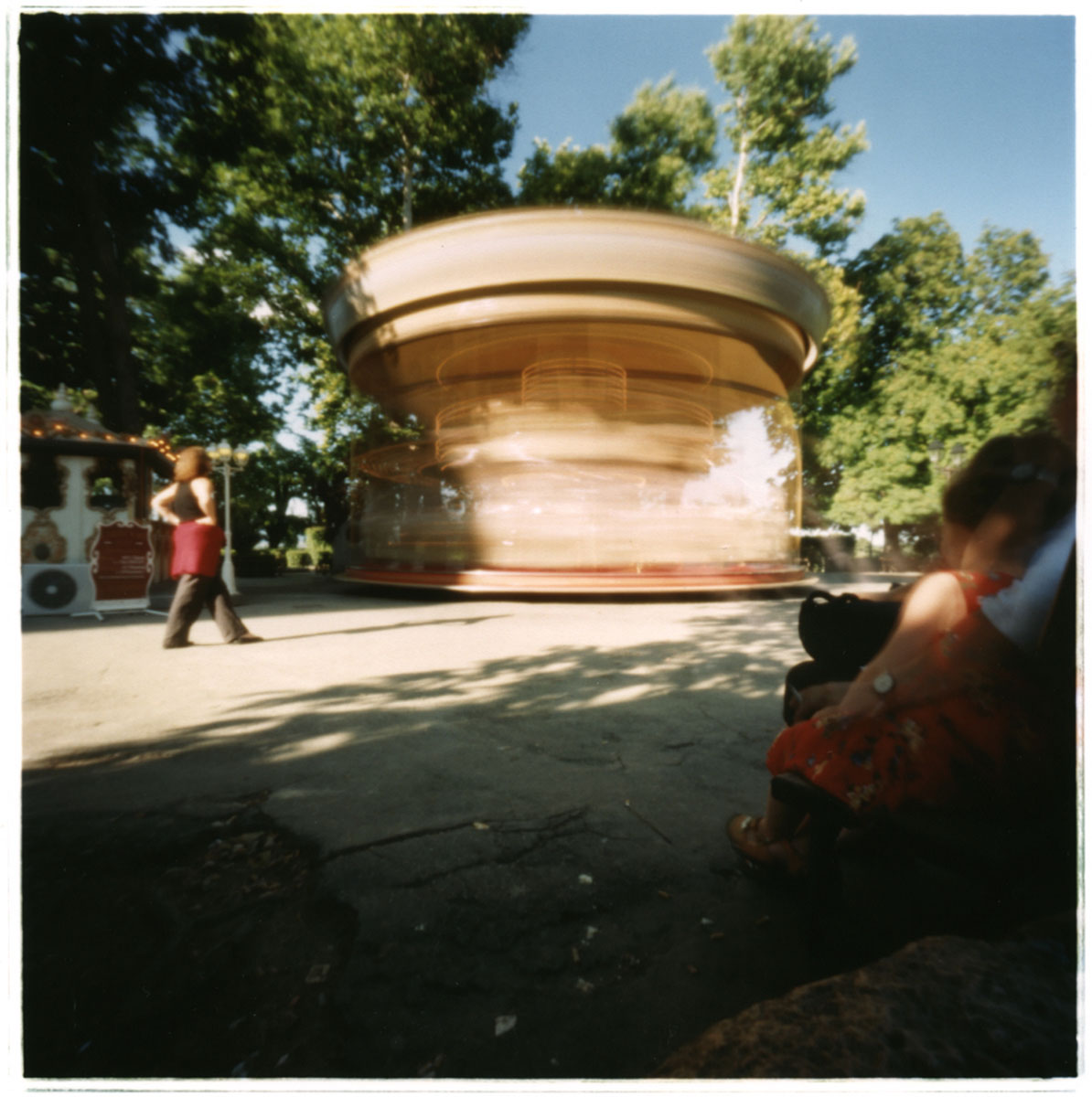 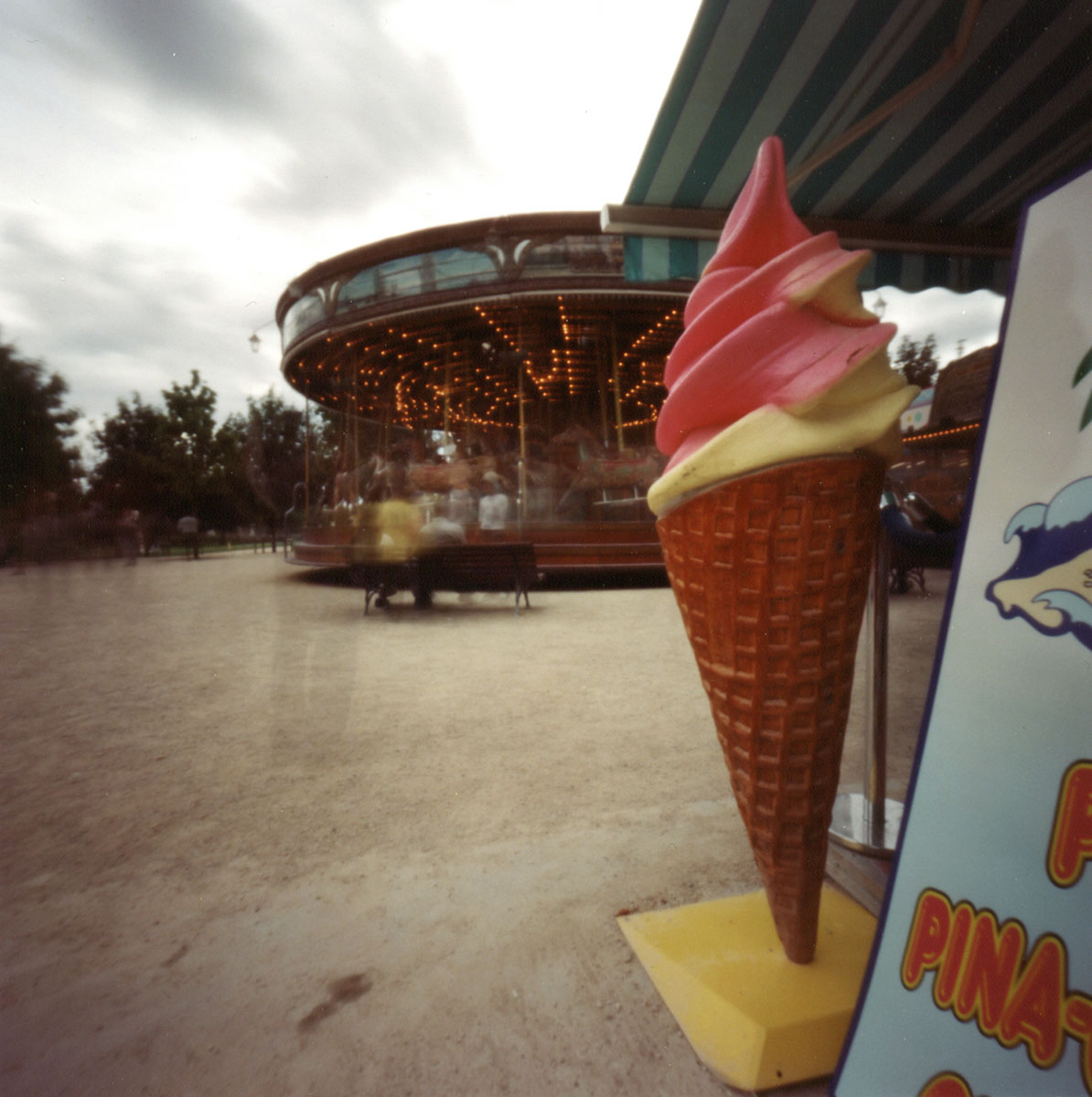 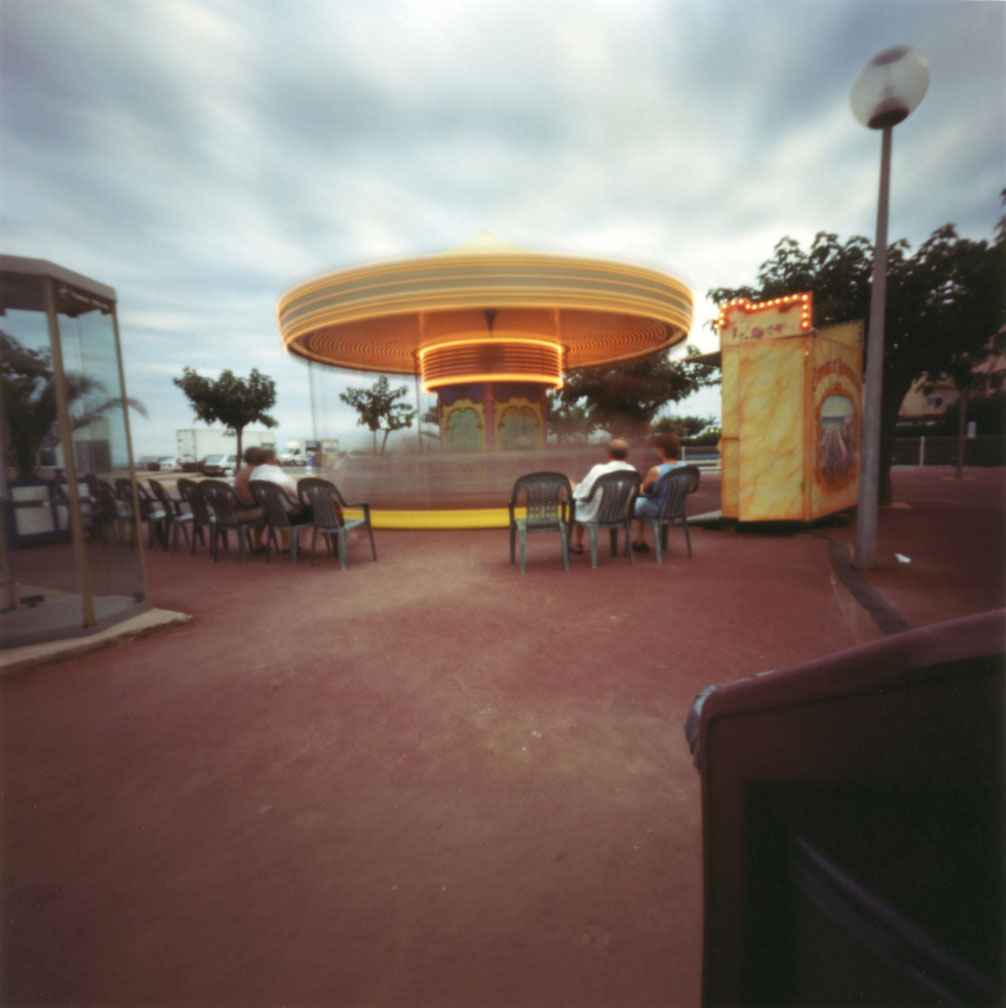 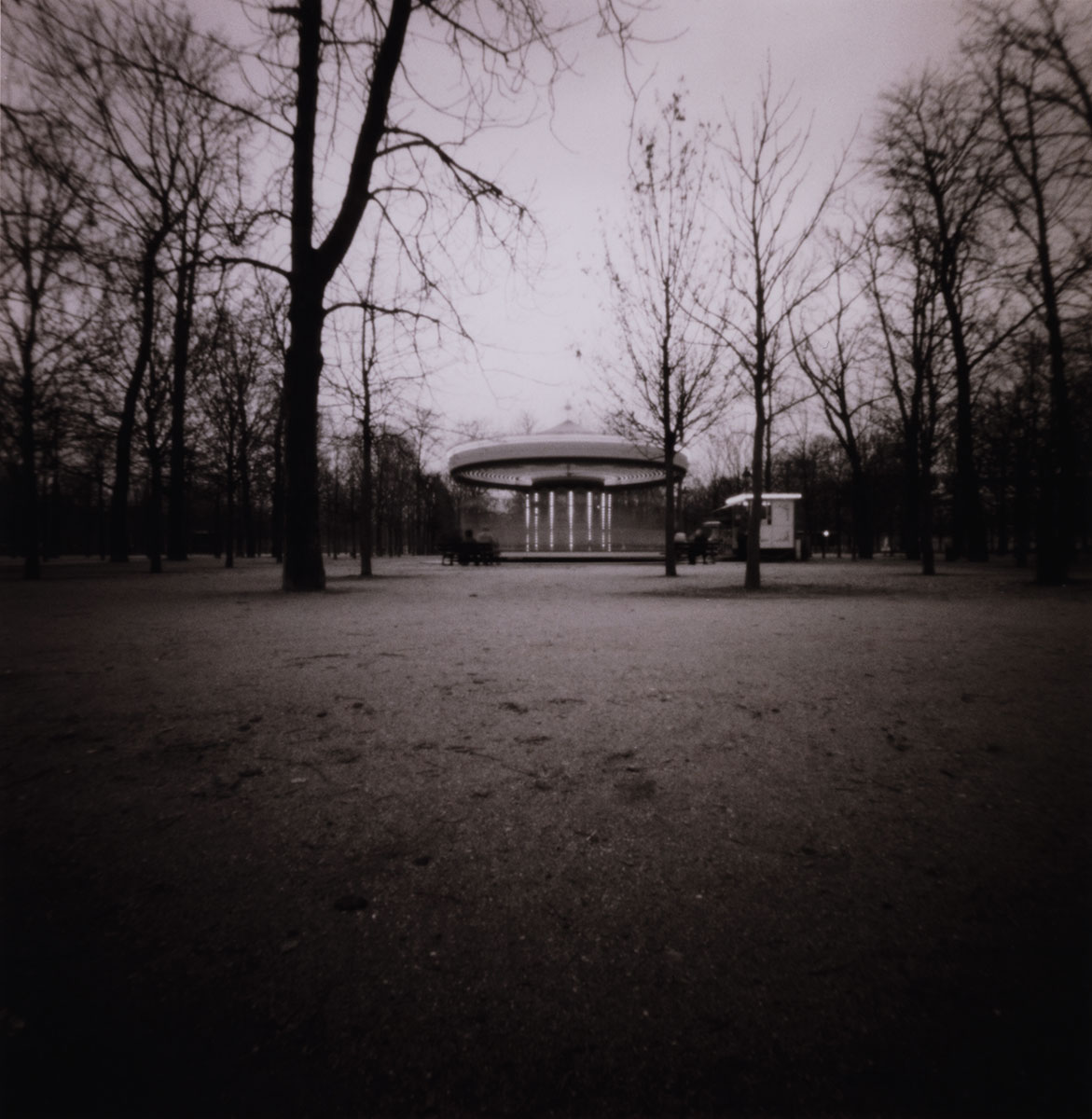 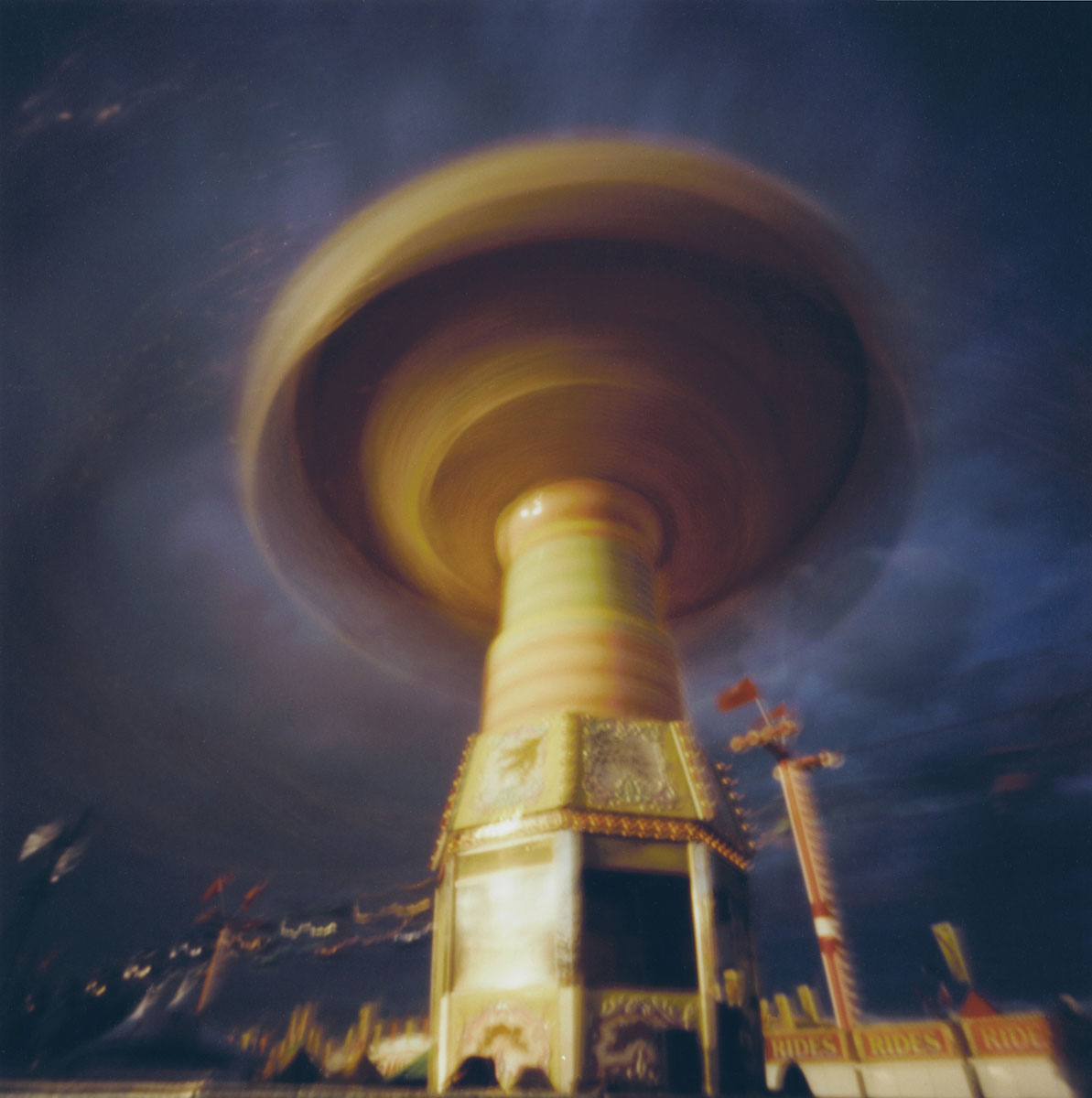 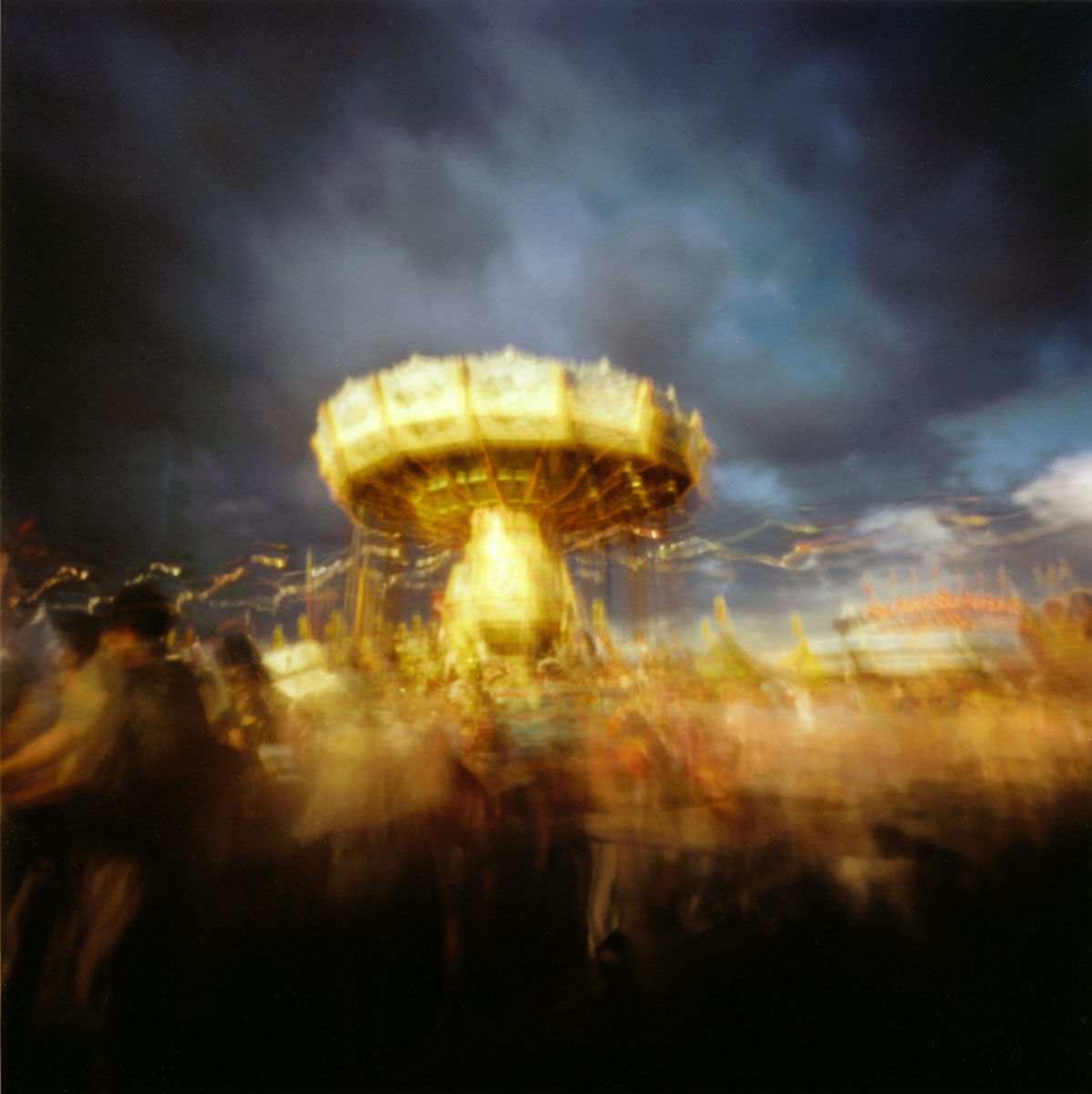 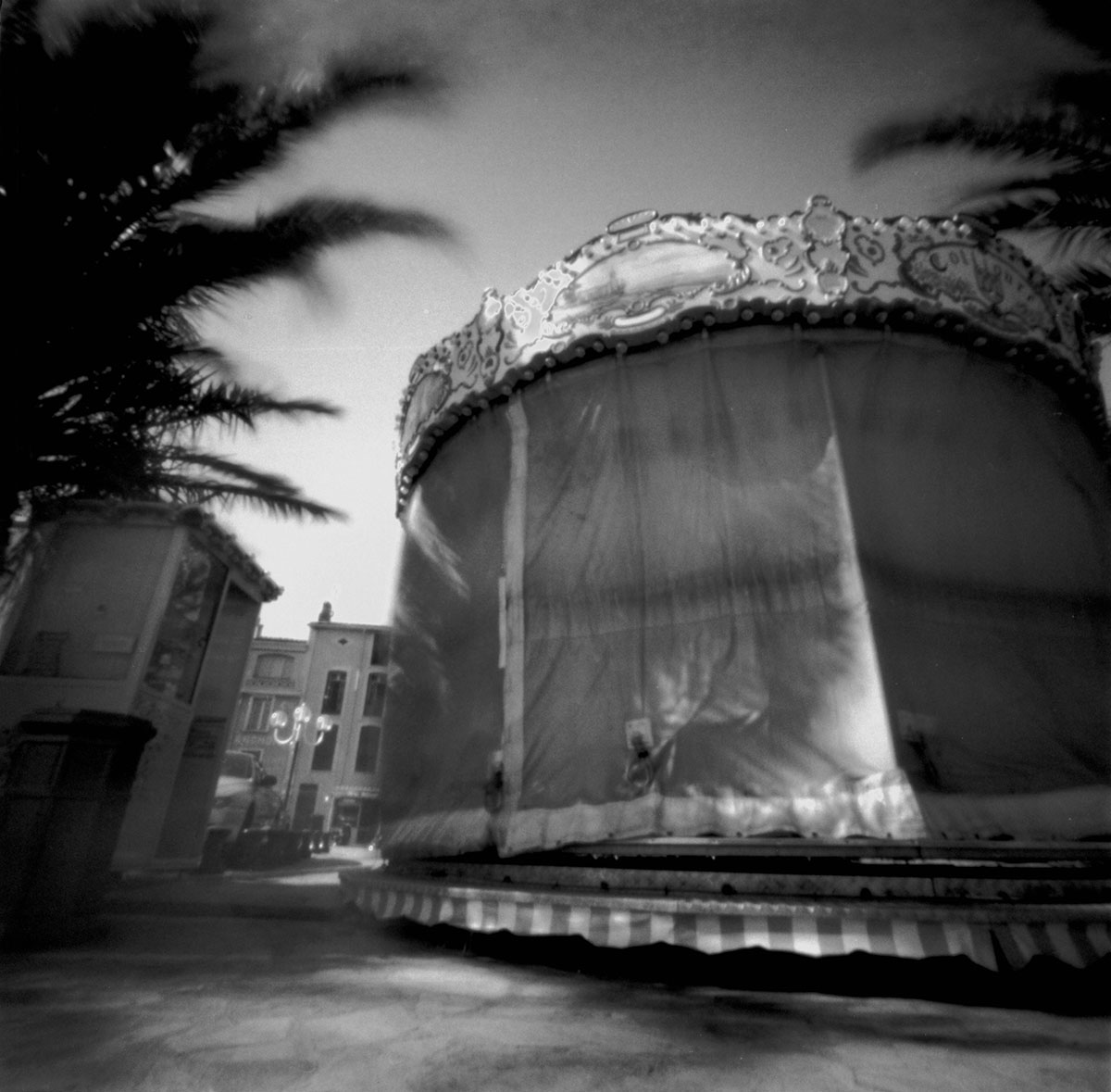 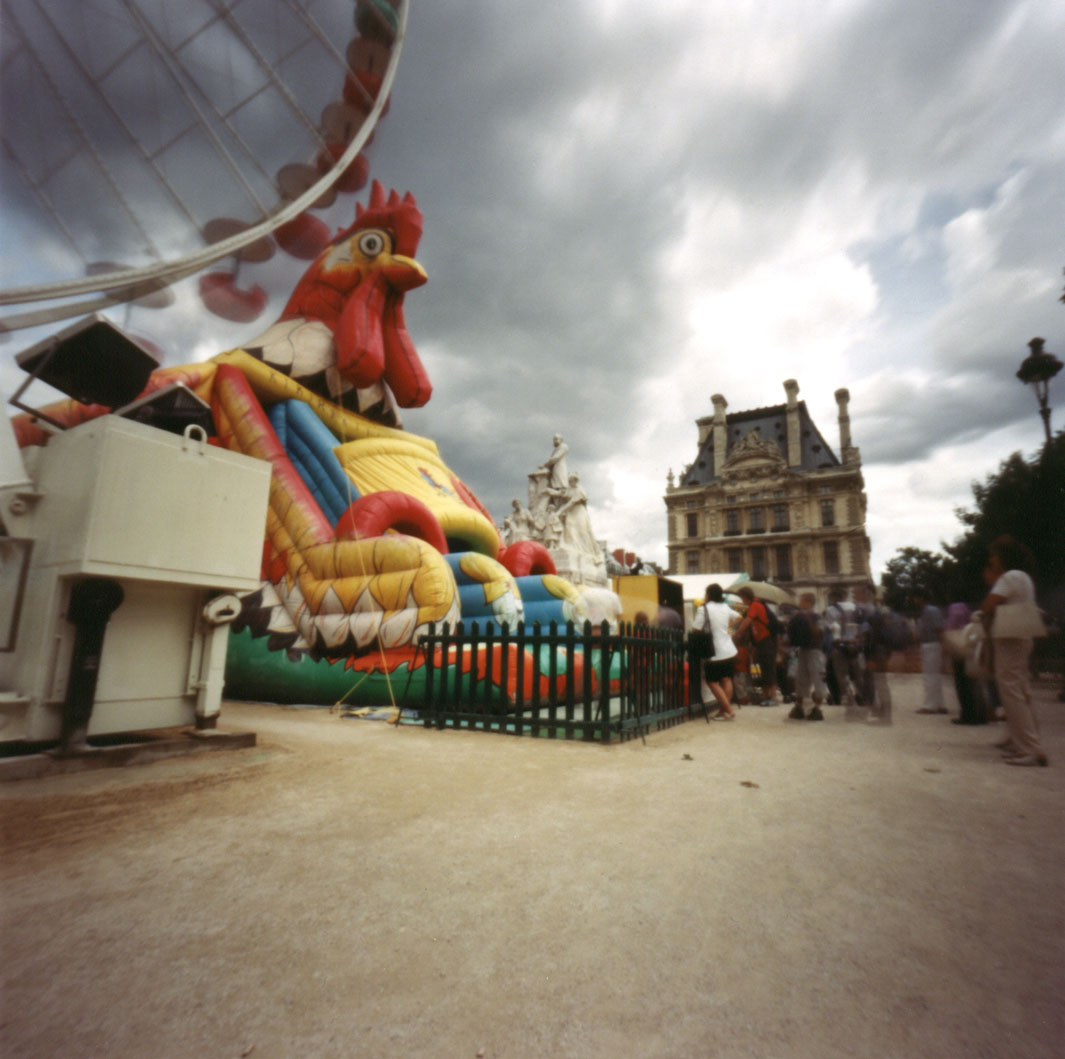 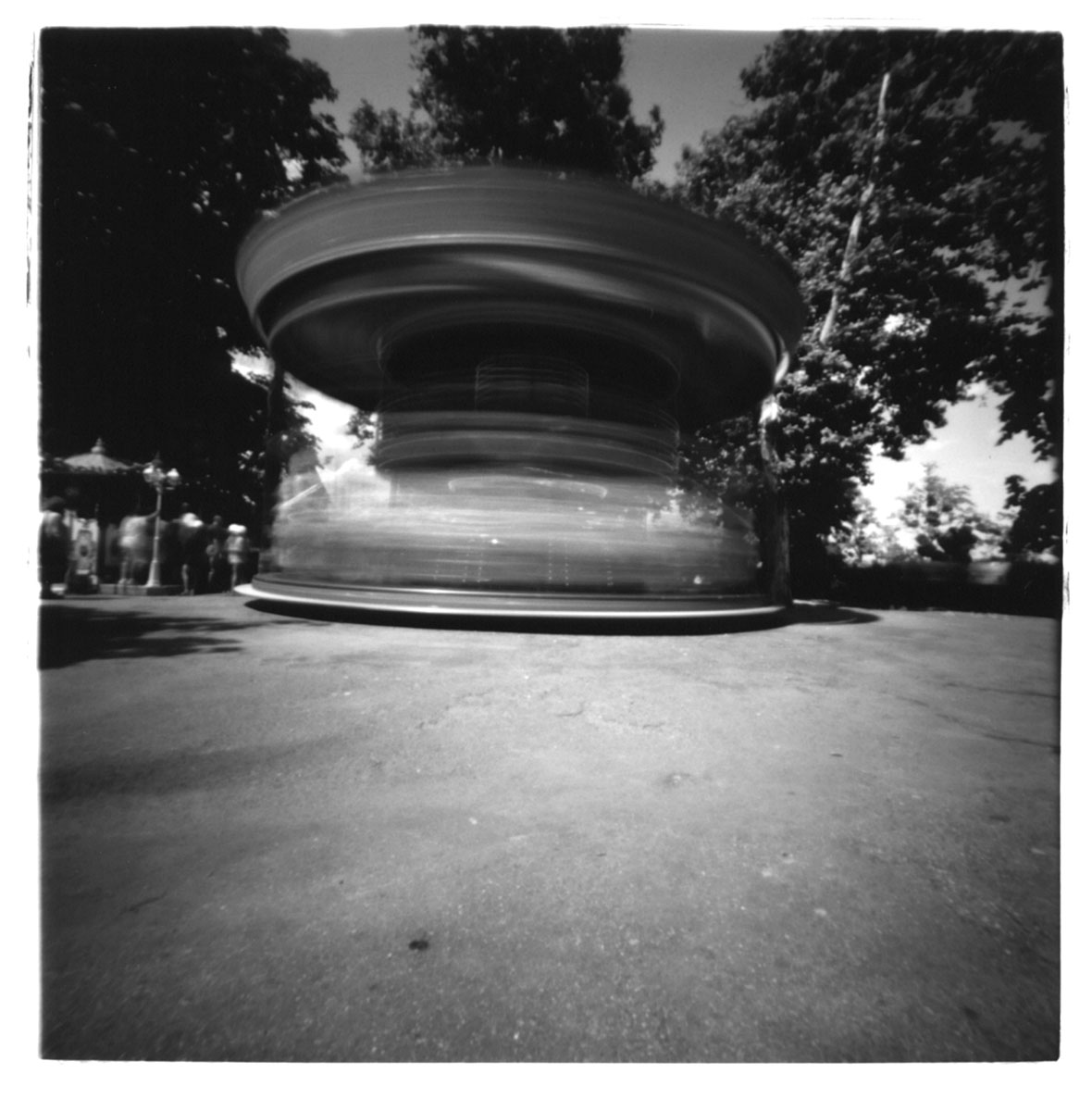 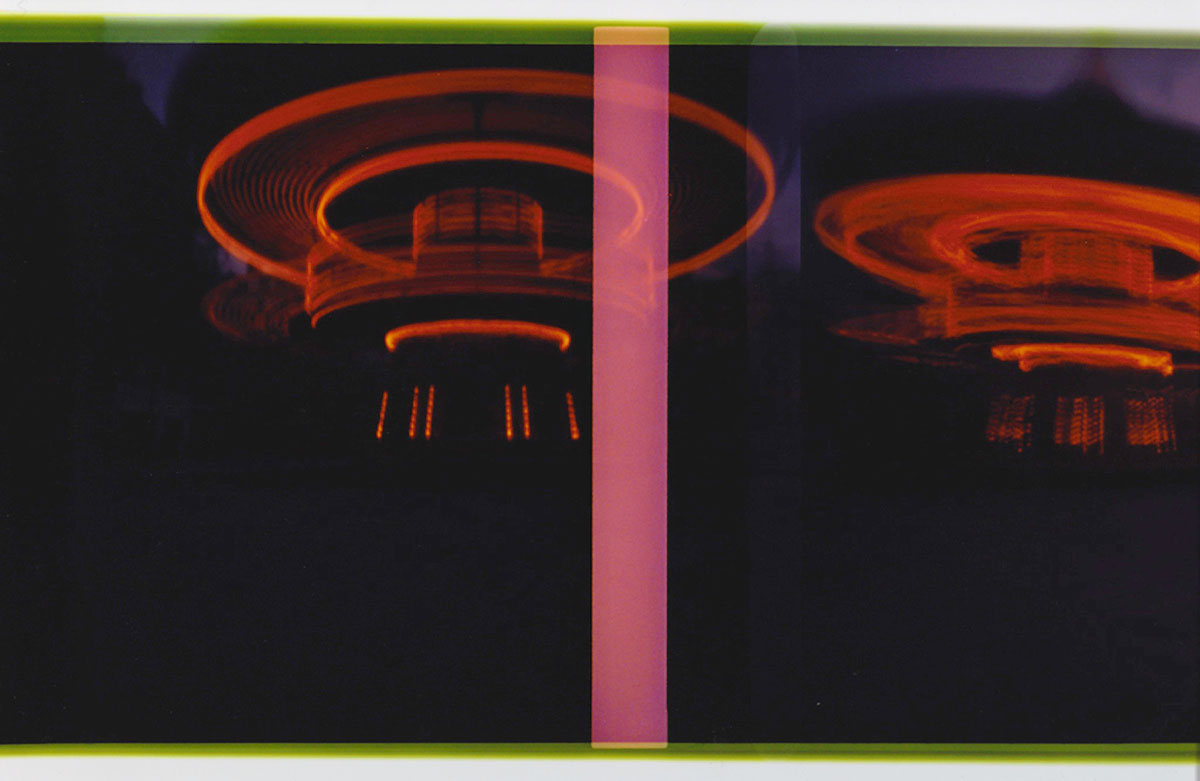 I photographed my first carousels in Paris in the late 1990s. I had picked up the strange little pinhole camera kit called the PinZip in New York City. It was a simple cardboard housing for a 126 Kodak Film cartridge, a nice little square-format film favoured by those who like to take family snaps. This film was already on its way out of production, so I managed to score boxes of expired film for nothing. Up until this time I had made all my exposures on b/w photo paper. I had never made pinhole images on film or coloured pinhole photographs before, so I wasn’t sure what I was going to get.

They were wonderful, and this was the start of a series I’ve continued since, featuring carousels in France, Italy and Canada. Glitter and songs spin, spiral and spill out. Everything but the patient guardians (both stone and flesh) is in motion. The carousels transform into elegant solid forms like clay on a potter’s wheel. For a moment the world we see ceases to exist and another world that flows there in tandem appears.

In the September 2002 edition of Discover magazine an article entitled ‘Our Galactic Carousel’ by astronomer Bob Berman caught my eye. He used the carousel as a metaphor for how the earth revolves within the Milky Way Galaxy. The concept of ‘riding a horse that moves at 137 miles per second’ verified some conceptual juxtapositions I had been pondering. I had been photographing carousels for a couple of years by then, fascinated by how they translated visually using the long exposures of the pinhole camera. The resulting photographic effect was something you did not see while standing there. The idea of photographing things I can’t see fascinates me, as it contradicts most commonly held beliefs about the honesty of the still image. This is no ‘decisive moment’. The carousels become spiralling galaxies of lights and life-forms blurred into surreal shapes with the occasional transfixed observer.